After Rome in 2008, Neuch├ótel in 2009, Jerusa┬Łlem and Ramallah in 2010, and then from New┬ĀYork to Las Vegas in 2011, Eternal Tour came to Geneva in 2012ŌĆöfrom May to JulyŌĆöand finished its race in S├Żo Paulo in September of this year.

Concretely, the Geneva edition was like coming back from an incredible shopping spree! Each new piece became an accessory that sparked new combinations with the rest of the wardrobe and really fleshed out the dressing room! The ideas, artists, processes and experiences all echo and recall one another.

An experiment on background and form was set up: among other things, the eternal questions of how to display publications, how to invest the exhibition space, how to integrate the public sphere, and to what extent an artistic and academic reflection can reach an audience were asked. These questions were broken down into four chapters. A. Salon des Dames (Centre dŌĆÖ├®dition contemporaine, ŌĆśCentre for Contemporary EditionŌĆÖ, Geneva); B. The Last Vegas Show (Flux Laboratory, Geneva); C. Feminist International Forum (B├ótiment dŌĆÖart contemporain, GenevaŌĆÖs ŌĆśContemporary Art BuildingŌĆÖ conference room); D. Cosmotopia (Le Commun, at the B├ótiment dŌĆÖart contemporain, Geneva).

The Salon des Dames was an invitation to intimate rendezvous with the goal of exchanging ideas on publishing and its particularities, by delving into the experiences and knowledge gained from previous stages of this itinerant event. The different evenings were just as many occasions to bring together artists and theoristsŌĆÖ discourses and weave a dialogue with the public. The mechanisms that lead to the production of an object are rarely unveiled: these discussions helped clarify the development and finalization processes of an editorial or film piece.

Half exhibition half opera, this garden party retraced the steps of the 2011 Eternal Tour in Las Vegas in an anthology of souvenirs spread out in the Flux Laboratory space. Scattered throughout the evening, passages of the Deserting Las Vegas show were set up in resonance with photographs, video projections, sound installations, discussions and culinary souvenirs of the American experience.

Feminist and gender questions composed the guiding principle of the different editionsŌĆöa forum more directly dedicated to these themes was held this year in Geneva. By appropriating a distinctly academic format, Eternal Tour created a space for discussion and for heterogeneous work: the forum simultaneously invited artists, theorists and activists to focus on the possibility of a cosmopolitan feminism, on its representation, or even on the role fiction plays in the composition of feminist identity and knowledge

Cosmotopia began on Monday May 28th with a performative painting project. Chapelle palimpseste invested the paintable surface of the exhibition space to the maximum. A traditional Palestinian tile motif and four stencils were made available to ten artists. Over the course of the passing hours and days, everything else sprang forth from each artistŌĆÖs own visual language. ŌĆ£When freedom becomes a constraintŌĆØ commented Crystel Ceresa during the process. Though the work method is more satisfying at the experimental rather than the pictorial level, it was also tributary to the rhythms of overlap, one artistŌĆÖs work covering anotherŌĆÖs, in a relay dynamic that could have extended well beyond the projectŌĆÖs set time limit. Chapelle palimpseste ŌĆō polymorphic, polyglot and polychrome ŌĆō ended arbitrarily on June 6th at noon so as to become the display case for a series of sculptures and installations of various scales, origins and status. Khaled HouraniŌĆÖs blue plaque indicates right from the entrance to the exhibition space that only 2092 km separates Geneva from Jerusalem. 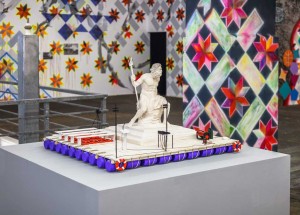