God Doesn‚Äôt Play Dice, He Smoothes the Edges
The exhibition God Doesn‚Äôt Play Dice, He Smoothes the Edges depicts Donatella Bernardi‚Äôs curiosity in the history of the city of Bern and her interest in making collages and mixing different media. When she was invited to exhibit at LOGE, Bernardi found out that Albert Einstein had been working in the vicinity of Bern as a federal functionary, quite unlike his later career as a visionary scientist. Today, the city of Bern also offers ‚ÄúEinstein tours‚Äù for tourists. The quote ‚ÄúGod doesn‚Äôt play dice‚Äù that Einstein allegedly said, and the fact that he was Jewish, led Bernardi to connect the incident to when Einstein was asked to be the second president of Israel by Ben Gurion in the 1950s.

The¬Ýscientist declined, saying that although he knew a lot about the laws of physics, he did not understand people and could not lead a country. Bernardi linked this background to her trip to Israel in January 2009. There she saw cubes like the Kaaba sprayed on house walls, indicating that the inhabitants who live there have completed the holy journey to Mecca. Playing with the German word ‚ÄûW√ºrfel‚Äú capable of indicating both a die and a cube, and struck by the simple and ephemeral manner of indicating the journey to Mecca in a graffiti-like way, Bernardi decided to make a collage between Einstein‚Äôs quote and the possible links between historical and formal items.

At LOGE, Bernardi made an installation of flexible Plexiglas mirrors and sprayed the Kaaba on the inside of the door of the exhibition pavilion. In the space, the viewer can only see him- or herself, referring to the idea that although we might know a lot about how the universe works, we have difficulties relating to one other, most of the time seeing ourselves within the other. 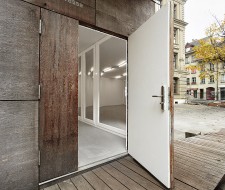 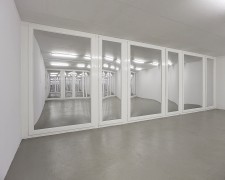 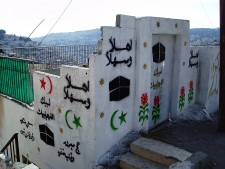