The exhibition Helvetic Zebra, developed in Beirut in October 2014, took as point of departure the richness of Lebanonâ€™s polyglot culture as a common and inspiring thread shared with Switzerland, a country characterized by its cultural diversity and political neutrality. It featured an interdisciplinary group exhibition featuring contemporary artists from Switzerland, Lebanon, Turkey and Morocco. The artworks challenged the limits and overlaps of visual, audio, textual, figurative and abstract languages. Starting with The Most Beautiful Swiss Books design award, Helvetic Zebra extended into hybrid forms of artistic languages, drawing connections between Latin typography and Arabic calligraphy, radio art, cinematic and optical art, graphic design and music. All these formats and their materiality will recall, reiterate and play with different artistic movements and traditions often associated with Switzerland, such as constructivism, surrealism, Dada and design.

Helvetic Zebra temporarily crystallized the effort to communicate and express beyond any message, be it political or cultural. The artworks were united by their multidimensional forms, because decoration can be stronger than expected, the radical monochromatic power of black and white, the art of creating ad infinitum letters (when the signifier is as important as the signified), the tessitura of a voice - unique every time that it is performed, and the experimentation with abstract, geometric and hypnotic systems. There are no indigenous zebras in Switzerland, except in a zoo. The hybrid metaphor of the Helvetic zebra, stripes on a skin, was the occasion to propose a constellation of objects and personalities starring this fictional and seductive unknown.

Helvetic Zebra, a project linked to the Swiss contemporary cultural production and automatically to its self-representation, was the occasion to work concretely together with artists and peers on postmodern notions already developed by Jean-FranĂ§ois Lyotard (e. g. Discourse, Figure, 1971) and Gilles Deleuze (e.g. Logique du sens, 1969). According to my current thinking, any contemporary art production discussed and reviewed, might be visual, graphic, sound, noise, sculpture, scenography, poetics or music, is inscribed on one hand in the conceptual art field (Lucy R. Lippard, Six Years : The dematerialization of the art object, From 1966 to 1972..., 1973), on the other hand in the post-medium dynamic proclaimed by Rosalind Krauss (Sculpture in the Expanded Field, 1979).

In the Lebanese context, such a research enriched by a strong intellectual and theoretical tradition but also sensual â€“ e.g. rock and experimental musician Franz Treichler playing on Fluxfilm No. 6 by James Riddle on the terrace of STATION where Helvetic Zebra was organized at the core of an area getting gendered widely â€“ got intensified by a polyglot and multicultural environment. At this very place of the globe, taking in consideration the geopolitical situation, exchange or dialog would have been expected to be the main drive of the initiative. Nevertheless, we did focus on producing and experimenting formally, following a certain urgency or necessity. Such an initiative and its impact are hardly predictable in such a complex field as Beirut. Only the present moment can be invested with certainty and passion, avoiding any national representation concerns and privileging an exploration of the different codes we use to manipulate and their limits. Avoiding sociological and political witnessing, Helvetic Zebra created a constellation of objects and events echoing and resonating between themselves and addressing the viewer without announcing any semantic limit they might have contained. With Mounir Fatmi, a disc could call another one. With Pierre Schwerzmann, the double page of an art book can become as picturesque and monumental as wall painting by Donatella Bernardi. If every proposed item of the Helvetic Zebra project would be a word, than it is the viewers task to compose its own text. â€śThe word does not exist without a signified and a signifier: but the signified is only the summary of linguistic value and presupposes the play of terms among themselves (...). What is in the word is only ever determined by the concourse of what exists around it, associatively and syntagmatically.â€ť (Robert Godel quoted by Jean-FranĂ§ois Lyotard in Geoffrey Bennington, Lyotard: writing the event, Manchester University Press, 1988, p, 59).

Syntactically, and on the first take, on one hand, the body of the typography character, its shape and color, the paragraph layout or the quality property: the calligraphy craftsman filmed by Ali Kazma in Istanbul. Semantically, what the letter might signify and the message contained and eventually delivered by the paragraph. â€śAgain in principle, insofar as I am reading, treating the book as text and not as aesthetic object, I pay no attention to plastic values of the printed signs: I recognize those signs immediately and that is all that matters.â€ť (Geoffrey Bennington, Ibid., p. 57). But any sculptor or artist making objects as Dunja Herzog is perfectly aware that the material chosen to constitute the artwork interferes through its physicality in any concretization process. Contemporary art is eventually a research field where syntax is never protected by the semantic contained in the material. Helvetic Zebra became an event to display the intellectual and sensual vertigo produced by a constant oscillation between these two poles, the conceptual syntax (Lippard) and the post-medium dynamic (Krauss), e. g. the art practice of Philippe Decrauzat. In the same manner, the repressed animosity or bestiality expressed by Oussama Baalbaki could be signified only trough painting and its specific brush strokes: where the skin surface got suddenly transformed in fur. In more mechanical terms, David Keshavjee and Julien Tavelli interventions during offset techniques processes address the sensorial and expressionist power of any printing process, its performative component that one would forget by only considering the final editorial result, might be a poster or a book. In order to launch such a complex exhibition built in a holistic and systemic dynamic, a one week interdisciplinary festival took place right after the opening, bringing together the different Swiss protagonists that had traveled to Beirut together with Lebanese artists and protagonists. 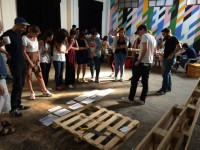 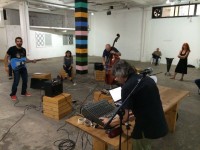 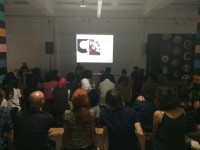