Written and curated by Donatella Bernardi and Fabienne Bideaud

Excerpt from Smoking Up Ambition! Journal
FOR A STRICT AND GRINDING SOCIETY

“Smoking Up Ambition” is a title borrowed, even usurped, from a silkscreen print by Andreas Dobler held in the collection of the Contemporary Art Fund of the Canton of Geneva (FCAC). If you’re ambitious, do you smoke right up to your ambition? Or is it ambition that consumes us while passion burns us? Ambition, both a powerful driving force and a destructive agent, can only exist in a dependency relationship with the other. Smoking Up Ambition! puts into perspective the need for recognition felt by the artist, the curator, the researcher, the creative person or the idealist. "If your´re not wearing a Rolex by the time you´re 50, you´ve messed up your life", you sometimes hear forty year-old males in Geneva saying. This expression refers to the codes of representation that reveal social categories. It also betrays the superficiality and even the ridiculousness that often characterizes ambition when it only refers back to itself. How can one record any accomplishment in the vanity of the reflection given back by any mirror? Smoking Up Ambition! could be a film script or the text of a play. In the current case, it is the starting point for a project that brings together a wide-ranging selection of art objects, architecture, performance, speech and talk. Smoking Up Ambition! unfolds as a sinuous, hazy cloud of smoke that solidifies into the form of an exhibition and fans out into a discursive programme - a series of "Piece-discussions", a transparent summer school, an evening event at the Motel Campo - and this journal. Our initiative could be an application of the system of thought studied by Erwin Panofsky. In fact, as the semiologist Jean Molino reminds us in his preface to Idea (1989): "We should not forget that the Idea is not an idea in the modern sense of the word, it is a presented form that makes a new form possible".

1st March 2005, Geneva city center. The body of a banker, squeezed into a latex bodysuit, is found lying in a pool of blood. A news item. A moment when “the event is fully experienced as a sign whose content is uncertain” (Roland Barthes, “Structure du fait divers” in Essais critiques, 1964). The bodysuit has nine holes in it, four of them bullet holes. “At first I thought it was one of those modern works of art”, relates Alexandre Koifmann, mathematician turned trader. Wanting to remove the skin in order to see, to understand and to reach the heart of the mechanisms. Anatomy, its contemplative nature and its bodily decomposition techniques border on thanatology. Yet in the Sicli Pavilion, it is only the surfaces that coexist, challenge or provoke each other or enter into complicity. Superficiality can sometimes have its good points. Monumental works produced in tapestry, glass, metal, painting, drip painting, powder, swimming pools, marble, concrete and screws rub shoulders with more fragile objects made of paper, fabric, hair, ceramics, wool or plastic. Übersinnlich, in Gœthe’s Faust, does not evoke the “suprasensory” but the “suprasensual” or the “supracarnal” in accordance with the great theological tradition in which Sinnlichkeit designates the flesh, the sensualitas. But these artworks, arranged for the duration of an exhibition, are they not merely a display of appearances, of good or bad taste, the accumulation and further intensification of a substance which, ultimately, is purely visible? The surface fantasizes the passage between the container and the content. It is a meeting point, a place of connection, friction and learning between the innerworld that inhabits and constitutes us and this exterior that we explore both in and thanks to its materiality. This skin, zone or coating is sometimes left raw, depending on the parent material. But it is also worked on or is subject to travesty or illusionism; borrowing codes, being dependent on them and deceiving us. The viewpoint functions as technology and artistic practice, still life as a genre, an exercise in style and existentialist manifesto. The artwork, as independent and autonomous as it is reliant on a chronological or semantic group, is understood as a whole in the space of immediacy. What do we perceive in this fleeting moment? Appearances can sometimes be deceptive. But is this not the perfect entry point for illusory ambition or a nebulous truth? How can we tell the genuine from the fake? Is this an interesting question? There will be opportunities to hear some of the artists speak about their work exhibited in the Sicli Pavilion in a series of “Piece discussions”. Iconological interpretation and historical philology: these schools of thought are complementary. The piece is selfcontained, exists without its maker, needs its viewer and, even if it explains nothing about itself or anything else, it is still there. In the best-case scenario, it disconcerts. For the masochist, as Gilles Deleuze explains in Coldness and Cruelty, “The ascent from the human body to the work of art and from the work of art to the Idea, must take place under the shadow of the whip.” While not actively seeking bruises, the exercise of legitimization is often painful. Discourse on art, art criticism and art history develop in parallel to the power of the veil of smoke and mist generated by the artificial bodies and volumes. Smoking Up Ambition! is the “suprasensitive” experience of a stroll through the Genevan collections, their history, their construction and their eclectic positioning. Narrative and abstraction overlap and become superimposed. Each work has been attributed a new role in a script that is perhaps usurping but certainly ambitious.

Created with the architect Constantin Hilberer, the Sicli Pavilion is the crowning achievement of the Swiss engineer Heinz Isler and was commissioned by Frédéric Sachs, owner and director of the Sicli fire extinguisher factory. Completed in 1969, the virtuosity of this building and its specific character derive from the use of two asymmetrical shells, thin veils of reinforced concrete that, although immobile, look as if they are about to take flight. This “architecturesculpture” seems to come straight out of science-fiction. Today, this double flying saucer is a heritage jewel used to host cultural events. Ironically or by happy coincidence, Smoking Up Ambition! is being displayed in a space previously used for the manufacture of fire extinguishers. Perhaps there really is no smoke without fire or ambition without illusion? Or shall we all be smoked out? The exhibition takes over all the rentable spaces, covering around 1000 m2. Multiple perspectives are provided by the huge hall with the large dome, whose vault and oculus are reminiscent of the Pantheon in Rome. It is also possible to view the works exhibited in the large dome from the upper floor with a bird’s eye view that, far from being divine, takes us back to the objectivity of what is presented. No standardizing neon lighting here: glass and its transparency function on all sides. The light evolves as the hours pass. The whale contains everything, bulimic and empty.

Collecting contemporary art? As Christophe Cherix, curator, rightly remarks, “the postmodern collection seems to arise midway through modernity." The collecting of contemporary works is also forcibly that of different formats, techniques and supports. Rosalind Krauss, art critic, justly invalidates any approach to contemporary art based on a strict division of media. To continue to be effective, categories have to become “almost infinitely malleable” and need to be extended so as “to include just about anything” (Sculpture in the Expanded Field, 1979). The collections of the FCAC – Contemporary Art Fund of the Canton of Geneva and the FMAC – Contemporary Art Fund of the City of Geneva, are resolutely postmodern and post-medium. The question of temporality is reflected in them on several levels. The inventories indiscriminately list works produced by artists who have now reinvented themselves and by those whose style was fixed at a certain point in time and has not evolved since. Resisting the imprint of an era, there are also artists who have led several different lives and whose practices are as changing as they are pertinent. For the FCAC and the FMAC, the issue is to acquire works with no exhibition venue of their own. Any display areas are therefore those offered or provided by others and the works are kept in limited storage spaces. Smoking Up Ambition! accepted de facto the paradoxes of Geneva’s contemporary collections. “A public collection only rarely satisfies the different communities that it is intended to serve. The municipal government, art critics and curators, artists, the art market and the general public all have different priorities.” (Katya Garcia Anton, curator). “How can one solve this painful equation between public taste that is necessarily conventional and a language which, by its very nature, is a factor in transformation and modifies our perception of reality? When the application of democracy seems so largely incompatible with creative work, are we not neglecting the question of its accessibility?” (Valérie Muller, then in charge of the collection of the Municipal Decoration Fund of the City of Geneva). To collect, is to choose and consequently to exclude. “A collection is the bringing together, the assembly, the keeping of objects. A collection is also the selecting of objects. Constituting a collection to provide a place for study, for research” (Catherine Quéloz, art historian). From a copious, polyphonic, local, national and international catalogue, we have chosen around one hundred pieces. The collections of the FCAC and the FMAC turn out to be complementary in the case of certain artists: John Armleder, Birgit Dam, Fabrice Gygi or Klara Kuchta. Like an echo, as far off as it is salutary, we have also had the chance to open a series of boxes belonging to the Society of Arts held at the Cabinet d’arts graphiques. These pieces on paper reveal the cultural landscape navigated by Geneva’s artists in the 19th century. Smoking Up Ambition!? – Rather than dialoguing with individuals who stand out from the rest, we have invested in a solidified nebula. 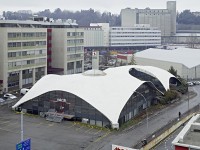 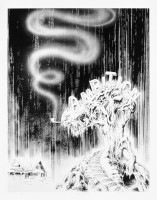 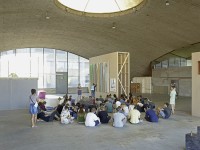